So, it has been a long time since I posted! This summer has been an adventure to say the least! June I was busily preparing for the school year and spending as much time with my kids as possible, and July brought a family vacation and an amazing two week trip for me to Sri Lanka. I am so in love with that place and the people, and a few of the people in particular are a part of my family now, and I can't imagine my life with out them! 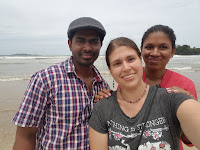 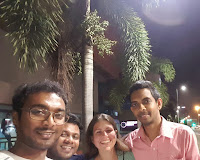 Then August brought the start of school, and that meant lots of adjustments in schedule and life and just getting back into a routine. I have lots to write about things I learned and experienced this summer, but this post has been on my mind for a while.


Today was a very interesting day however, and will generate a post very soon about how amazing our friends are, and about how maybe there are times it takes God intervening for us to realize we may need to slow down! So, stay tuned for more folks, because this journey is just getting more and more beautiful by the day. 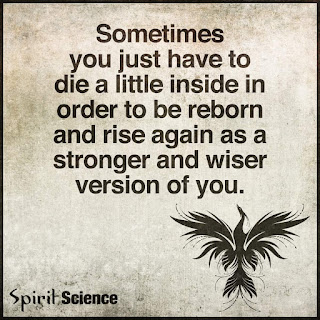 This quote came across my Facebook news feed about a month ago and I instantly saved it. I have been contemplating it ever since. I have had several thoughts about on a few different levels. First, spiritually and how I have to die a little inside and be reborn in Christ. Second, relationally particularly in relation to my husband and how I need to die a little in order to follow his lead better and wisely work together vs against each other. And third, personally as I think about the transformation process I go through as I become older and wiser.

As I thought about the idea of dying a little inside in order to be reborn, I couldn't help but think about what Christ did for me on the cross. Because Jesus died on the cross for my sins I have to die to the sinful way of human nature, and then I have to be reborn in Christ which does make me wiser and stronger. The Bible says in Romans 6: 6 - 11, "Could it be any clearer? Our old way of life was nailed to the cross with Christ, a decisive end to that sin-miserable life—no longer at sin’s every beck and call! What we believe is this: If we get included in Christ’s sin-conquering death, we also get included in his life-saving resurrection. We know that when Jesus was raised from the dead it was a signal of the end of death-as-the-end. Never again will death have the last word. When Jesus died, he took sin down with him, but alive he brings God down to us. From now on, think of it this way: Sin speaks a dead language that means nothing to you; God speaks your mother tongue, and you hang on every word. You are dead to sin and alive to God. That’s what Jesus did." This clearly represents this idea of dying on the inside in order to be reborn stronger and wiser and more like Christ. My problem tends to be sometimes that I can't seem to kill of that sin on the inside. I like to hang on to it a little too much at times, but what I liked about this quote is that it really made me think. If I just kill off that sinful part (which will never completely go away, but I can stop hanging on to some of it), then I will become an even stronger and wiser me, more and more like Christ, which is my goal to bring glory to God in being worthy of being called a daughter of God.

I continued to think about how this idea of dying a little on the inside to be stronger spread to other parts of my life besides just spiritually. And I realized in my relationship with my husband was one for sure. There are so many times that I am extremely stubborn, it kind of is just part of who I am, but when it comes to my relationship with him, the bible is clear that he is the leader of our home. Sometimes, I can push and push and push or just not let an issue drop because the answer he has given doesn't quite satisfy what I was hoping to hear. And that is when I have to stop and die a little on the inside and tell myself (particularly tell the stubborn self centered part of myself) he is the leader, listen to him, and trust that he is leading in the right way. I have to die a little on the inside so I can put his needs and our children's needs before mine. Not in a die inside and lose who I am and be a door mat that they walk all over, but die on the inside so that in my self-sacrifice I can become wiser and stronger and kinder to the people God has placed in my home, and trusted me to love here on earth.

Then, that brought me to thinking about myself, and how I am in a daily struggle to be stronger and be wiser, but often the way I go about doing that is not by looking in, but focusing only on the outward methods of training, when really if I did focus on the end, I would be dying a little on the inside so I can be reborn into something stronger and wiser. The idea is to let those things inside that need to die go and not just sweep them under the rug, but officially take those things out of my life, and begin to focus on building myself up spiritually, relationally, and professionally.

I've decided to embrace this idea for the rest of the year. I want to have a goal of dying a little on the inside each day so that by the end of the year I can be stronger, and wiser, and hopefully more capable of being able to bring glory to God, my father.
Posted by New Beginnings at 9:13 PM