The definition of a critic is a person who expresses an unfavorable opinion of something, or a person who judges the merits of literary, artistic, or musical works. I think that is really interesting. The definition alone almost guarantees whatever the critic is going to say will be negative. I love to watch shows where people, cook, dance, sing, design, whatever it is and then are judged on their work by the "experts" in that field. I find that I myself become a critic as I watch judging what I think and expressing my opinions on what they have just done. Whenever someone gets a negative review they either, bust into tears, begin arguing why they disagree and what they did was so good, or they take the criticism and turn it into fuel to work even harder the next time. That last reaction is rare though. Why do so many of these contestants get so emotional over their work? They take all of the comments so personally, and they let it either fill them with sadness, anger, or defeat, even if what they created was really awful.

I find that I too handle criticism in much the same way. When someone says something negative to me, I take the criticism very personally, and I see it as a reflection of myself. It doesn't matter if what is being criticized is something I have done, said, or actually me, I view the criticism as a direct result of who I am.

This week a student said something to me that made me instantly become hyper critical of myself. With one comment from an 18 year old I immediately began evaluating everything I had done and am doing looking for weaknesses to pick a part. I took the comment very personally and was hurt by it. If I had been a cartoon character you would have probably seen steam shooting from my hears and my face would have been bright red (which I am sure it was already a bit red for real!). I had to fight back tears and emotions that were not appropriate for the classroom, and had to finish that class, and make it through another class before I was able to fully process how what had been said, and my reaction to it.

As I thought about this incident this week, I began to realize that I have always been overly sensitive to criticism. It started at a very young age. I remember never wanting anyone to be unhappy with what I had done. I would cry when someone scolded me or I would get angry at the criticism. As I have gotten older I think it has just gotten worse. I know I tend to overreact to criticism in some form or fashion. This really got me thinking. Why do I overreact to the feedback people give, even if it is done in a way that is positive?

And I finally came up with an answer, one I should have made the connection with a long time ago. Everything I do, I pour my entire heart and soul into. Whether it is loving my family, doing my school work, planning lessons, helping people, being a friend, whatever it is that I am doing I am going to give it 100% of myself. I think this is why I sometimes don't want to do some things if I can't focus all my attention on it. If I can't pour every bit of myself out into what I am doing, I would rather just not do it. The only problem with this is that because I have poured every bit of myself out into what I have done, when someone criticizes my work, or how I do something, or how I don't do something well, or any other number of things, I take it as a direct criticism of ME. Everything I am is a part of what I have done, and I suddenly take that negative critique and twist it to be about me, and how I am lacking. I don't view it as what I did is lacking, but it must be ME who is lacking in some way. I let my heart get so connected to what I am doing that I can't help but take whatever is said personally. 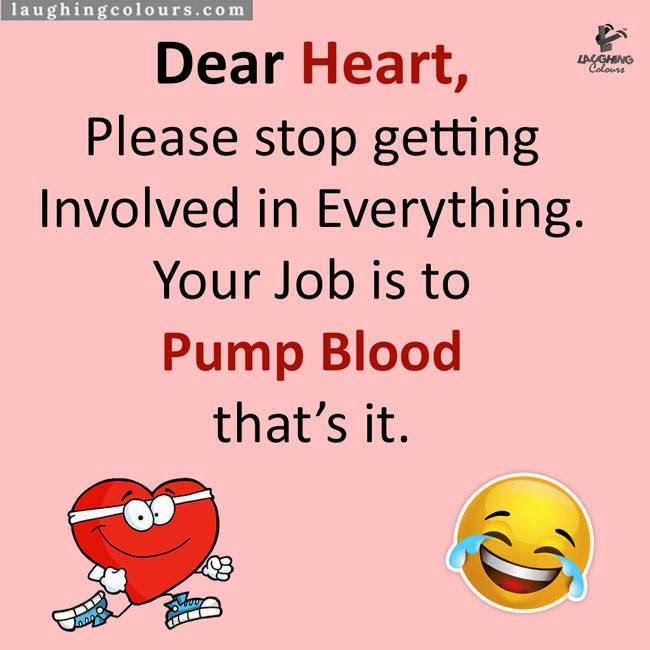 I saw this picture and I couldn't help but think, "THAT is exactly the problem!" My heart can't help but get involved in everything I do... And while that is a good thing in some ways because I put forth an extreme amount of effort, and I care intensely about the people and things in my life, it also means that I let any criticism of how I am doing things cut to the heart. I think I am already so hard on myself about things, and over analyze my work thinking it is not good enough that when someone else says something negative it is like a double whammy!

It is the same way for those people who are on those shows, as good or bad as their singing, dancing, cooking, designing, or WHATEVER it is they are doing, they have poured their heart into it. And it cuts deep when someone says what you have spent so much of yourself to prepare just doesn't measure up.

So I find myself in a conundrum. I either should try not to invest so much in all I do, or I should try to not take it so personally when someone criticizes my work. And that's the thing. Often what they are criticizing is just my work. It is something I do it is not who I am. I have to be able to separate who I am from what I do just a little bit, so that I can take the criticism and effectively use it to be one of those people who take the critique and go and work even harder to come back on top.

Ultimately, I have to remember that everything I am doing is for the Lord, not for men, and if He is pleased with me then I have done my job, and I can't let one comment, criticism, or negative steal my joy.

"The LORD is my strength and shield. I trust him with all my heart. He helps me, and my heart is filled with joy. I burst out in songs of thanksgiving." Psalm 28:7
Posted by New Beginnings at 2:10 PM